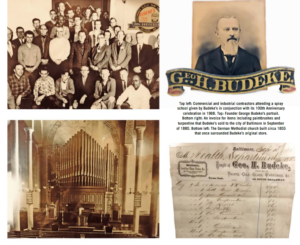 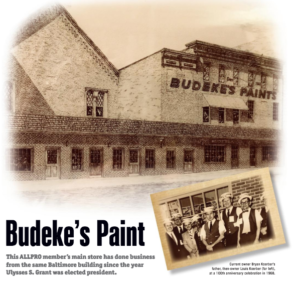 This year marks the 150th anniversary of the founding of Budeke’s Paints & Decorating, as we announced in February. We are really proud of being successful for this long. A longer version of our story is featured in the current issue of The ALLPRO Independent, a publication of ALLPRO, the international trade association of independent paint and decorating professionals, and we’re proud to be featured in such an outstanding periodical.

Bryan Koerber, our owner, is a relative of the original owner, George H. Budeke, who founded the business in 1868. Our main location today is still in the very same South Broadway building here in Fells Point. Bryan told the ALLPRO folks, “I am probably sitting in a living room, bedroom or parlor that is 25 feet wide and 20 feet deep. It’s where they lived. Where my great-great-grandparents lived and raised two boys. And they worked downstairs.” [2] George was a success, and he operated on the principles of quality, service, value and integrity, that still inspire and guide us today.

One of George’s sons ran the business next, and he was followed by a son-in-law, Robert Gardner, and eventually by another son-in-law, Louis Koerber, Bryan’s father.

Louis ran the business from l965 to 1996, and 23 years in, recruited his son to leave First National Bank of Maryland, where he was working after earning a degree in economics from Johns Hopkins University. It wasn’t an easy decision for Bryan, and took him three months to think about it, before, as he says: “I accepted the offer. I took a cut in pay. I gave up my blue pinstriped suit.” Eight years later, in 1996, Louis Koerber surprised his son by announcing at a meeting that he was retiring and Bryan would be the company president. Though being surprised, Bryan’s history with the company had prepared him well to continue the successful business practices, and introduce new ones.

Our Fells Point location now covers an enlarged footprint, having spread over six adjoining buildings over the years, one of which was a church. Bryan describes a couple of the unusual features of our offices: “One can see the original ceiling fresco with cherubs and the choir loft. I have the last stained glass window in my office.” [2]

While the number of business locations changed a few times, we now have our two locations that operate pretty much on separate business models. The original Fells Point operation has been in tune with Baltimore’s growth, renewals, and continued development. We specialize here, in the industrial, commercial part of the paint industry and offer delivery service out to projects as far as 50 miles away. While this gives us an edge over other independents, our long prosperity truly comes from the hard work, knowledge and expertise of our entire staff, which creates long-term relationships with our customers and knows just how to meet their needs. They are the best!

This is true of our staff at the Timonium location as well, where we provide more residential services of a conventional retail operation to this affluent, suburban community.  At Budeke’s we know that the secret to our success is largely due to the same four principles embraced throughout our 150 years, from the tenure of George H. Budeke to Bryan Koerber: quality, service, value and integrity.